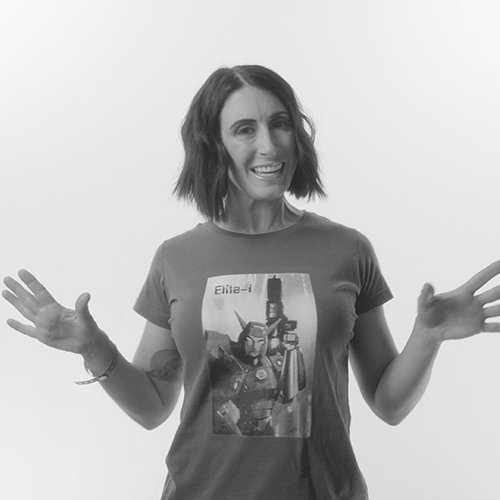 Linsay Rousseau is an award-winning LA-based actor, voice-over and performance capture artist with over 20 years of theatre and improv experience. She is best known as the voice of Elita-1 in the Transformers: War for Cybertron trilogy on Netflix, for which she won the One-Voice Award for best female performance in an animated series. She has also worked extensively in video games, including DEATHLOOP, God of War: Ragnarok, Fallout 76, Vain Glory, Rage 2, World of Warcraft, Wasteland 3, Call of Duty Mobile Elder Scrolls Online, Rogue Company and Monster Hunter: Rise. On the MOCAP side of things, she's worked on games for Santa Monica Studios, Insomniac, Naughty Dog, Riot Games and HBO/Survios. Her voice has also appeared in episodes of The Boys on Amazon and in Marvel's Black Widow. On-screen, she has appeared in episodes of NCIS, Seal Team, General Hospital and she had all the judges fooled in her appearance on To Tell the Truth.​ A bona fide geeky badass, she hosts the weekly geek talk show, The Roll Out, on YouTube, is part of the live play Dungeons & Dragons podcast, Dragonlance: Echos of Kryn, with Lawful Stupid RPG and you can catch her each month streaming D&D with The Charismatic Voice. Coming soon - she will be joining a brand new streaming D&D campaign with an exciting cast of players you might recognize. www.linsayrousseau.com